Manufacturing unique running and cycling apparel in the U.S.A.

This was supposed to be the race where I qualified for Boston. I knew the course well having run it in 2016. I was aware of how to get through the first 10 miles controlled so I could attack on the downhill. Then, winter and lack of motivation happened.

If you have been following the “My BQ Push” posts you know that my training hasn’t been quite what I was hoping for. I have no legitimate reasons. My only excuse is that my motivation was not there from December through March and once I did get back to somewhat of a normal training regimen, it was too late. All of these things said, I still ran a good race! I finished in 3:26. My main goal for the race was to go sub 3:30. I knew if I could achieve that, I would be pleased with my performance.

I learned some things about myself during this race. I was in better shape than I thought I was, to a degree. I was capable of knocking out a solid first half; 1:36. I was quite pleased to be at the half mark in that time, but that may ultimately have been what kept me from being closer to 3:20. The first half of the race felt smooth and comfortable. I started to feel the toll of the mileage on my legs around mile 17. By mile 20 I had started instituting some run/walk combinations as I went along to try to keep from totally bonking later in the race. I also found out that supporting those individuals you pass as you navigate your own race will return the favor later on if you are on the receiving end of a “course-lead ass-kicking” of your own. When the chips are down, your fellow runners manage to elevate you to continue on! Check out some of the details of my race below! 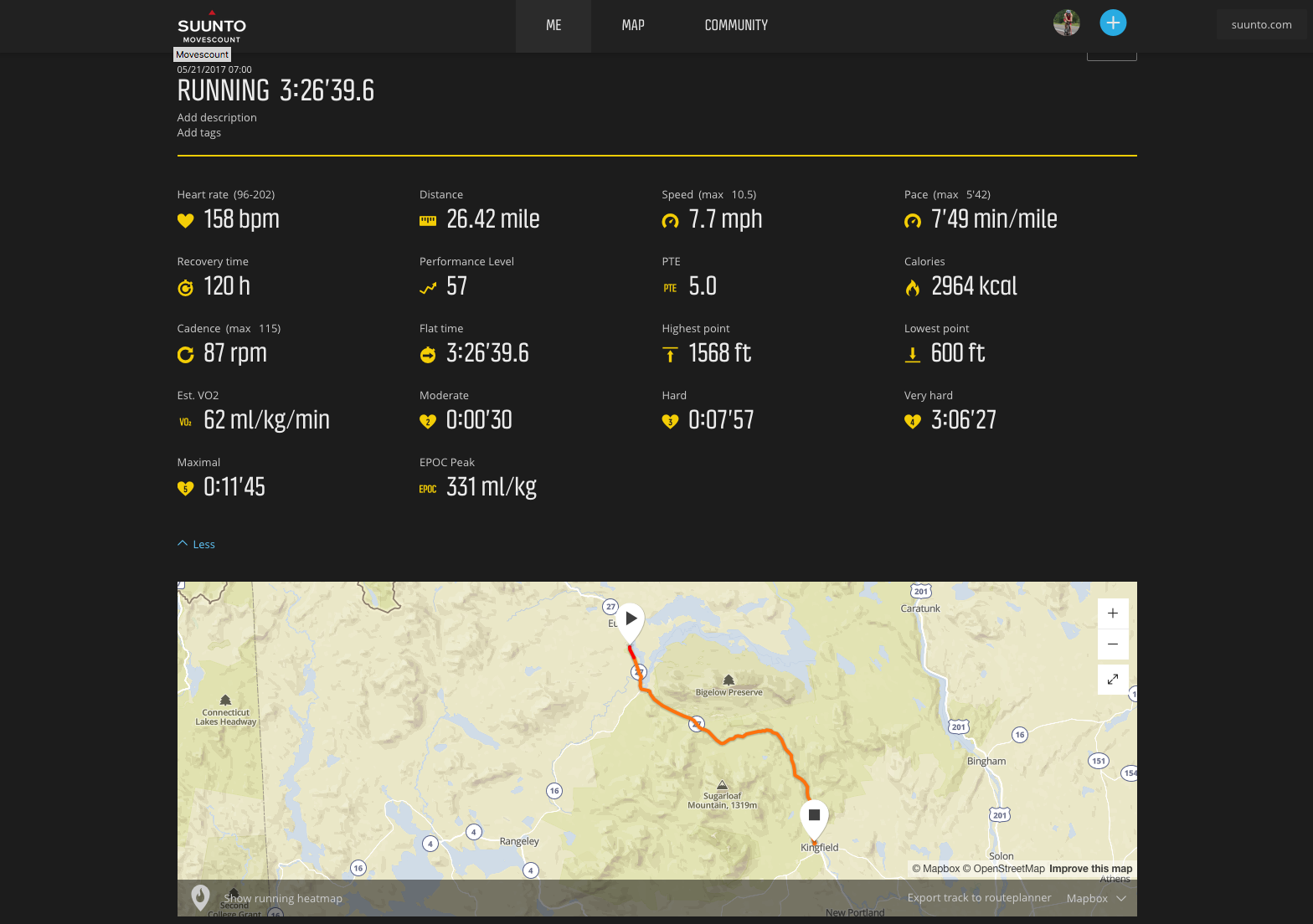 The course profile (Sugarloaf Marathon Map and Elevation Map) is quite unique in that the first 10 miles contain the major uphills and the last 16 miles contain all of the downhill; 942 feet of elevation loss to be exact. The first half fatigues you and the second half hammers your legs with constant downhill pounding. Add into the second half the need to also run up long, gradual uphills on those beaten and battered legs and you have the recipe for a long second half, should you not be prepared properly!

There is already some talk of going back next year. There is also talk of someone close to me running their first marathon there next year. This would be cause for proper training and celebration, respectively.

I know that I am capable of the 3:10 I now need, and then some. I know that I can do it. In all reality, only time will tell!

The 2016 Musselman 70.3 race was a TON of fun! The course proved to be very scenic and much more on the rolling side of the spectrum, than the flat side of the spectrum. The race organizers and volunteers did a fantastic job with setup, course marshaling, and post-race throwdown. The food was phenomenal!

Here are my thoughts as they pertained to my performance and take on the day as it unraveled, which is exactly how it felt at one point.

For starters I was not trained as much as I would’ve preferred, but hey life happens and we make the most of where we are and what we have, so race I did! The morning started well. Normal early bird call to drive the roughly 30 minutes to the starting line. We did a REALLY good job of getting organized the night before (big kudos to my wife on this!!) so we could catch an extra bit of shut-eye and get out the door just a little later. We hit the starting area at the PERFECT time, FRONT ROW PARKING!!! We unpacked the bikes and our respective kits and headed to transition.

Transition setup went much smoother than usual. I think I am finally getting a routine of both action and placement in my transition area. Of course I double, triple, and quadruple-checked it, but who doesn’t (every single other racer, maybe)?! Off to the swim start!

I was good on nerves until my feet started to get wet as we entered the water. I gave my mother and father-in-law a quick wave (making sure to look super collected…haha riiiiight) as I began to wade farther into the water. Mid-thigh, I’m ok. Waist-high, I’m ok. Chest-high, ummmm, convince yourself you are ok Jason! Diving in to cover my whole body, I realized I was feeling very odd. Nerves were on high alert. I was NOT mentally ready for this swim. HOOOONNKK!!! The pack took off and I was in last place in my wave in what felt like :05, but in reality was probably :30-:45. I started to panic around 200m in. No idea why. My body was NOT having this whole swimming thing. I broke into breast-stroke, regained some composure, and resumed my swim. Fast-forward to about 1 mile into the swim, where I FINALLY felt like my stroke was normal and didn’t feel like an Pterodactyl trying to fly through yogurt. I made sure to follow all the instructions I had been given to not step down until I was ON the unloading dock to make sure I did not cut my feet on the mussels. I made it!!! Transition, here I come!

Once I was on the bike, I felt comfort settling back in. I found my rhythm fairly quickly and started to settle in for the 3+ hour ride. I had a goal of 3:05 or faster to try to stay on my goal of PR’ing. The bike was flat to start, with some small rollers and false flats. The big surprise on the bike course was the very steep hill that came roughly half way into the ride. We had studied the course profile, but we had not mentally prepared for THAT type of hill. Nevertheless, I focused on cadence and ground my way to the top. Once on top, I knew the majority of the ride was downhill or flat, or so I thought. Big mistake. Again, the course profile had not mentally prepared me (or maybe I hadn’t mentally prepared for the course profile. I shouldn’t fault the course) the last 8 miles of fairly significant rolling hills. They. Were. Hard. Near to the end of the course, there was also a section of what could only be described as post-apocalyptic asphalt that had to be ridden over. It was torture after 40+ miles and I wasn’t sure if my TT bike was going to take the beating; I felt like one of Mike Tyson’s opponents from when all he did was come out and hurt you for about :13 seconds until you crumbled in agony and gave up. SWEET JESUS, there is T2!!!! My forte, the run, was next!

The run was fantastic. I broke out onto the course intentionally hitting a faster clip to start to get my legs to open up and loosen up the tightness caused from the bike leg. I had a goal of running sub 8:00 pace. The start of the run was flat and fast, running along the lake and then diving into the town of Geneva. I pushed my body after a few miles to really try to get a good hard pace going because I knew I was racing the clock, literally, for my PR. The majority of the run was “normal”, but there was one nicely sized hill around the 10k(ish) mark that definitely put a dent into my pacing. I hit the top of the hill and knew the rest was mostly downhill or flat, with a few rollers that would require a little extra kick to get up. As I hit the half way point of the run, I began doing math (thank you to my wife on this one!) to see what I needed to do to hit my goal of getting that PR. With each mile, I realized I was going to do it and continued to push the pace to see what finishing time I could pull down. I came back along the water into the last 2 miles and was loving life! The volunteers on the course kept the runners hydrated, topped off with food, and gave a TON of support right when we needed it. I came in to the finishing stretch and didn’t have anything to give for a kick. I crossed the line, felt accomplished knowing I achieved the day’s goal, and promptly laid down on the ground as fatigue began to settle in.

Looking back on the race and the experience; I would recommend this race to anyone looking for a great race at the 70.3 distance without a doubt and with ZERO hesitation. The race was fun, the people were supportive, and the town was great. Who knows, maybe we will be back in the future!

If you have questions or comments, please leave them!

PS- There is a Musselman wall/mural in Geneva for anyone to sign who competes in the race. Check it out if you do the race or are in the town for other fun stuff!